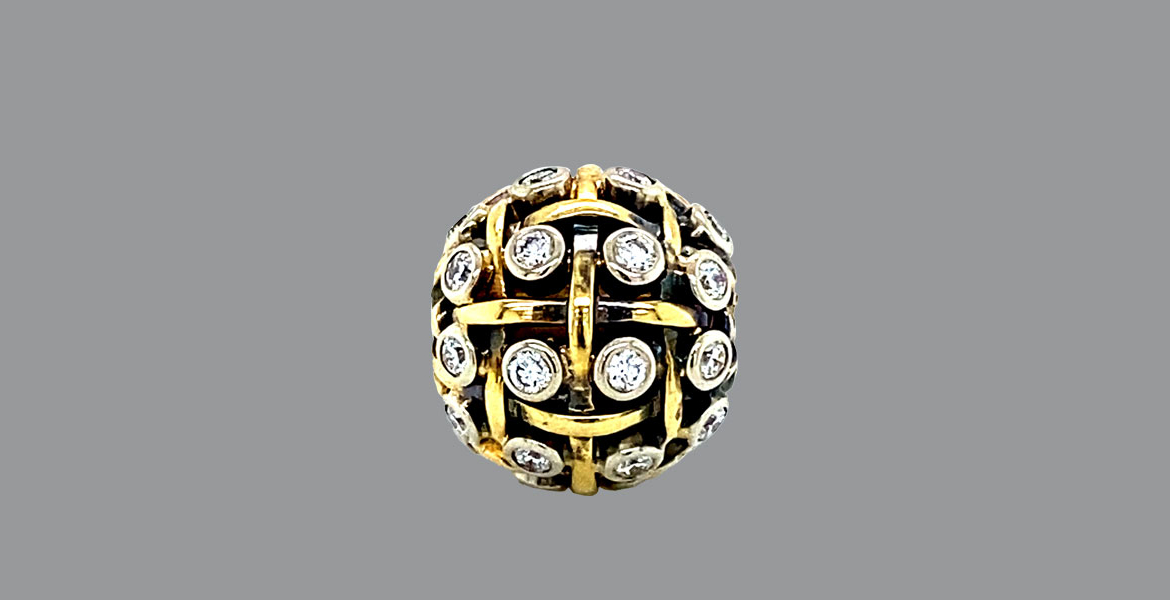 Jacob and Phillip exhibiting American Jewelry Artworks at a jewellery trade show in Toronto, summer of 2001.

In the spring of 1997, four brothers in their late twenties and early thirties from the watch and jewellery trade, converged in New York City to attend Cartier’s retrospective exhibit at the Metropolitan Museum of Art.   This would be the last time the four brothers would be in the same place at the same time for many decades to come.  Each brother related to the Cartier brand differently as it pertained to their own area of expertise. Not unlike the Cartier family that was founded by four men – three brothers and a father – each of the four brothers was also an expert in a specific area of the fine watch and jewellery trade.  All but the watch and clock expert had completed his studies at the Gemological Institute of America (GIA).  The third brother had his own clock and watch shop that featured some of Switzerland and Germany’s finest movements.  The two eldest had, at that point, accumulated over a decade each in the industry that began at an early age. Before they could legally consume alcohol, they had already explored the emerald and tourmaline mines in Brazil, created lifetime relationships with miners, gem dealers, cutters and lapidaries, and forged deals with the Brazilian government to export its emeralds.  The youngest brother, Jacob, had recently completed his studies in casting and gold-smithing at GIA, and was currently working as a dedicated apprentice to Ernst Seifert, a master goldsmith formerly of Harry Winston.  Jacob’s area of expertise would later revolve around white metals, such as 18K-19K white gold, platinum and palladium.  The eldest brother, a GIA certified gemologist, was preparing to launch his own fine jewellery brand, while Phillip, the second eldest, was a coloured gem expert who supplied important clients throughout North America with precious jewels for their productions. Often referred to as “a walking encyclopedia” by both his customers and peers in the industry, Phillip’s expertise was an all-encompassing knowledge of fancy coloured diamonds and natural gemstones.  At the Cartier retrospective, the four brothers learned that before Cartier was an international brand, Pierre, one of the Cartier brothers, operated a jewellery manufacturing and sales facility in New York City called, American Jewelry Artworks. Later, Pierre folded this company into the Cartier brand.  The design, craftsmanship and vision of the Cartier family inspired Phillip and Jacob to team up and resurrect the name, American Jewelry Artworks. Identified by its acronym AJA, American Jewelry Artworks was born again to a new generation of brothers.

Phillip and Jacob envisioned AJA as a type of workshop that facilitated the creative vision of jewellery designers. Rather than promote the designs of one brand the way Pierre of Cartier had done, the reincarnation of American Jewelry Artworks would invite talented and creative designers access to the workshop, AJA would produce their vision, and designers would be acknowledged in their own right.  Jacob would oversee the casting and Phillip would provide the fine gem stones. Together they would manage production. By 1998, the two brothers had set out to communicate and reach out to jewelry designers and master goldsmiths across North America through trade shows, magazine ads, and road trips.  Their presentation at trade shows was distinctly unique, meant to attract designers rather than merchants. Instead of showing a large inventory of ready made jewellery, they promoted a unique handmade production process, and a facility with master goldsmiths that offered world class workmanship.  This was the era before CAD CAM became a regular fixture in workshops. Designs were drawn by hand, molds were hand carved, metals forged by hand, and the relationship between the designer and goldsmith was very close to ensure the designer’s vision was realized.  AJA offered jewelry designers a facility where production standards were comparable to a couture house.  In the decades that followed, AJA became an award-winning workshop, each piece that AJA produced acquired a unique history steeped in design talent and unique natural gems that exhibited some of the best craftsmanship in the world.  True to its name as an artwork, AJA rarely produced a jewellery line, but rather its logo can be found embedded in unique and exclusive one-of-a-kind jewellery items – with a story.