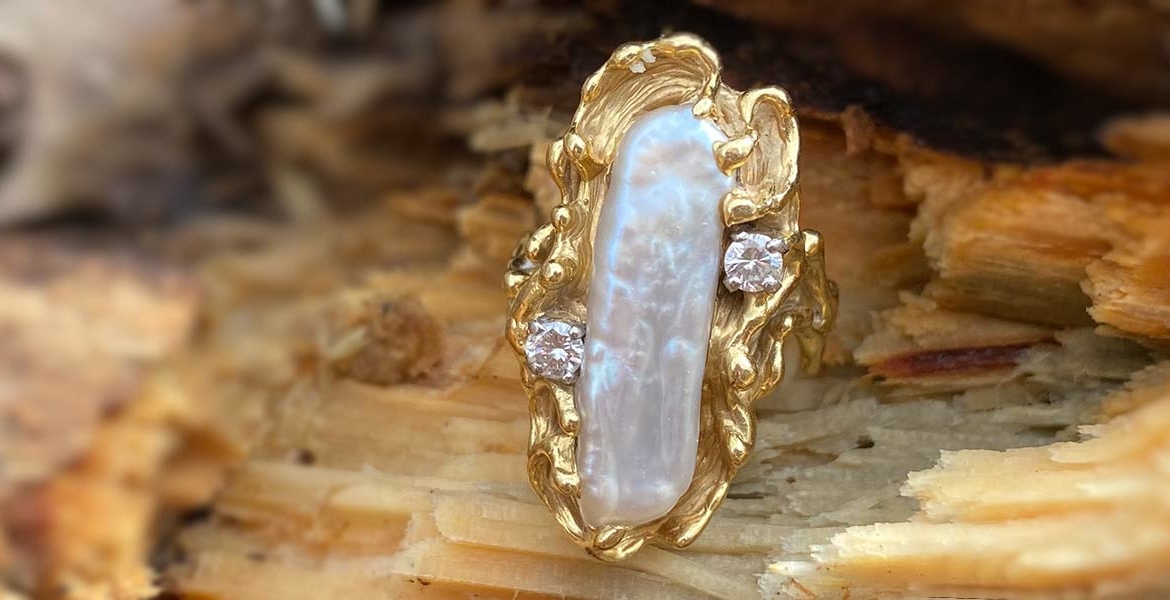 Pearls are the only gems on earth that form inside a living creature.   Both saltwater and freshwater pearls form inside mollusks –  such as oysters, clams, mussels and abalone.  A pearl forms when an irritant (like a parasite, or a tiny piece of coral) lodges itself within a mollusk’s mantle tissue. It gets so deep inside the shell the mollusk cannot expel it.  As a result, the creature’s shell producing system begins to coat the irritant with nacre.

Nacre is composed of the mineral aragonite, combined with an organic binder called conchiolin.  Aragonite is a form of calcium carbonate, the same compound that makes calcite, which is valued 3 on Moh’s Hardness Scale.  Subsequently,  pearl is valued at 2.5, which is quite soft.  A pearl’s nacre can be easily damaged with harsh cleaners or rough care.  Conversely, if pearls are treated gently and with care, they can be a lasting heirloom for many generations.

As the nacre forms around the nucleus, the pearl inherits a translucent to opaque transparency and a pearl’s distinctive lustre is formed.   Lustre refers to the light reflecting qualities of the pearl and contributes to the value of the pearl.  The formation of aragonite around the nucleus affects the quality of the pearl’s lustre. If the the aragonite plates are too thick the pearl will lack polish and appear dull.  Aragonite plates are very thin, 300-1500 nm (nanometers), similar to a wavelength of light.  As they are layered on top of each other and around the nucleus (like an onion) they can cause diffraction,  which appears iridescent when reflected back to the eye.  Thinner aragonite plates cause greater diffraction, which means a more lustrous and higher quality pearl.  Thick aragonite plates do not diffract light and cause the pearl to appear chalky and dull.  Conchiolin is the organic substance that acts as a glue, holding the layers of aragonite together.

Pearls can have both a body colour and an overtone.  A pearl’s colour is determined by the mollusk, as well as various environmental conditions such as water, nutrient supply and so on.  Pearl colours are categorized as white, black and coloured.  Black pearls form when a layer of dark conchiolin in the core of a pearl shows through the thin layers of aragonite crystals.  Colours such as blue, red, purple, violet, yellowish and green are most frequently found in freshwater pearls.

Although most pearls have the characteristic “pearly lustre” only fine quality pearls have orient.  Orient is a form of shimmering iridescence that displays a colour layer distinct from the body colour.  Visually, orient produces a colour that seems to stay in place, even as the pearl moves. The effect can be one colour or a combination of colours.  To examine orient on a pearl, move the pearl further from the light.  You’ll be able to see either a single-colour overtone or a multi-colour orient.  To view overtone and orient, you can also place the pearl on the same background as its body colour.  The value of orient and overtone in a pearl is determined by how much of the pearl’s surface the effect covers. Orient forms when the edges of overlapping plates of aragonite crystals create a diffraction through which light passes and disperses, causing a surface iridescence (much like the mother-of-pearl lining of shells).

Both lustre and orient derive from the thickness and perfection of the nacre layer on the pearl’s surface.  While orient plays a small role in pearl grading,  lustre is evaluated on a scale of dull to pearly.  The pearl’s lustre is then evaluated by its polish, which ranges from dull to nearly metallic.  Size and lustre are two major characteristics that determine a pearl’s value. The larger the pearl and more pearly its lustre the greater its value.  The individual value of pearls in a matching pair, or matching pearls in a strand, are valued higher than a single pearl because the two or more pearls are not only naturally formed in their own mollusk,  but must be matched in size and lustre – like finding a twin born of different parents.

Around 1910,  cultured pearl production began in Japan.  To form a cultured pearl, a pearl farmer plants the nucleus in the mollusk’s tissues (typically a mother-of-pearl bead) and then adds a piece of mantle tissue from a donor mollusk to prompt nacre formation.  In some freshwater pearls, the mantle tissue alone serves as the nucleus,  prompting the mollusk to form layers of nacre around the piece of tissue rather than a bead.  The pearls grow from six months to seven years.   The type of mollusk used determines the pearl’s size, colour and quality.  Even the part of the mollusk’s body where the pearl grows can make a difference.  Cultured pearls make up most of the pearls on the market today.

The oysters we eat are not the oysters where pearls grow.  Technically, a pearl can grow inside mollusks from the family Ostreidae (the kind we eat) but they would not be the higher quality used as gems for jewellery.  Pearl oysters that produce most of the saltwater pearls on the market today belong to the Pteriidae family.  Akoya pearls are produced by the Pinctada fucata oyster. These mollusks naturally occur in waters throughout the Indo-Pacific region, from the Red Sea in the Persian Gulf to the cooler waters of Japan.  The Akoya oyster reaches maturity at age three.  Most oysters receive one or two implants. If the farm is growing small pearls, one mollusk can have up to five bead nuclei.  The pearl grows for six months to two years.  Longer incubation times result in thicker nacre and higher quality. The pearls are harvested in the winter season when the cool waters slow growth and result in higher quality nacre.

The mollusk that produces South Sea pearls is called Pinctada maxima. A white or gold lip determines whether the oyster produces a white or a golden coloured South Sea pearl. This is the largest of the cultivated molluscs, reaching 30cm in length.  Scuba divers collect mature shells from the ocean floor, which are brought to farms for nucleation.  Efforts to breed these oysters in hatcheries has only recently shown success.  Each shell can only receive one bead nucleus at a time.  After grafting, the oyster rests on the sea floor for three months to ensure the nucleus is accepted. The shells are then raised from the seabed into waters that are rich with food where the pearls grow for two to four years.  If the pearl is of high quality,  the farmer will quickly insert another bead. Although these second pearls grow larger than the first, they tend to have poorer lustre. On rare occasions, one mollusk will produce three pearls, but each pearl is a lower quality than the one produced before it.  The first pearl is always the nicest.  Tahitian pearls form in the black-lipped mollusk called Pinctada margaritifera. These pearls produce spectacular, large pearls with a black body colour and colourful orient.

The biggest producers of freshwater pearls are three different types of mussels,  1)  Hyriopsis cumingii,  2) the Biwa pearl mussel Hyriopsis schlegelii  and,  3) a hybrid mussel between the two.  These mussels start life as tiny larva in the wild, that attach to the gills of a carp to travel upstream.  After a couple of weeks, they float down to the bed of the stream or pond.  On pearl farms, the carp doesn’t move the tiny larva upstream.  Instead, the young mussels are collected from the lake bed. These mussels reach adulthood in three years although some are seeded before they reach maturity.  These mussels can form pearls for up to seven years and are also harvested in the winter months.  During harvesting, the pearl is removed from the pearl sac and seeded with another nucleus.  Some molluscs can produce three rounds of pearls.  Unlike the mollusks that produce saltwater pearls, freshwater mollusks produce better quality pearls after re-seeding,  each generation produces better lustre and more intense colour.  However, not all farmers re-seed their mollusks.  The demand for low quality and inexpensive freshwater pearls preempts the time and resources required to reseed a freshwater mussel that produces a lustrous high quality pearl.  Thus, freshwater mollusks are often sold with the pearl still in the shell.

Imperial Topaz For Fools and Kings