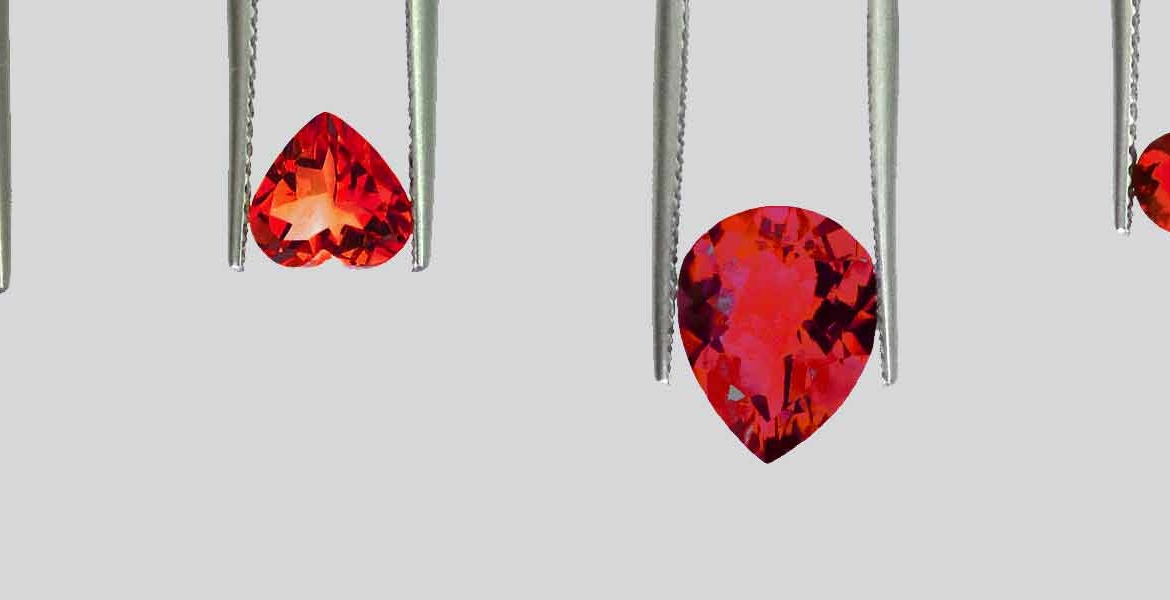 The natural ruby is one of the most expensive gems on the market.  Ruby is a corundum, which means it is a red sapphire, with a hardness of 9/10 on the Mohs Hardness Scale.  (View this chart to compare the corundum with other gems.)  The ruby’s hardness makes it very resistant to scratching.

Rubies are subjected to more treatments and enhancements than most other gems. Heat treatment is used to enhance the ruby’s red colour.The GIA states that you should always assume your ruby is heat treated because non-heat treated rubies are rare and command a high premium. Rubies from Myanmar (formerly Burma) are unique from rubies mined in other countries because Burmese rubies possess the highly coveted “pigeon blood” red colour naturally, without heat treatment. TheGemShop.ca can provide a Burmese ruby on request.

One of the most popular traditional jewelry stones, ruby is exceptionally durable.  Its colors — always red — can reach vivid levels of saturation. Fine-quality rubies are some of the most expensive gemstones, with record prices over $1,000,000 per carat. However, rubies are also subjected to more treatments than almost any other gem. ~ gemsociety.org

Large, natural rubies over one carat are rare, as are unique cuts.  Emerald cut is the most rare, followed by oval and cushion cut, then round, pear and marquise.  Unique cuts and large sizes over one carat demand a premium price.  Large, natural rubies can be more expensive than comparatively sized diamonds because they are more rare. Even small, deep red, non heat treated and eye clean rubies can be relatively more expensive than diamonds and other precious gemstones.

Rubies are rated “excellent” for everyday wear. Avoid exposure to heat and contact with chemicals. To clean, gently scrub with a soft toothbrush and a solution of mild dish soap and warm water, or clean in an at-home ultrasonic unit.

Clarity refers to a gemstone’s transparency and anything that can impact how the gemstone transmits light.  All corundum gems, including ruby,  are Type II gems in terms of clarity.  This means that all rubies normally contain inclusions. Inclusions can be fractures inside the gemstone, as well as other materials, such as liquids, gasses, and even crystals of other minerals. For example, some rubies contain inclusions of crystal needles of the mineral rutile. Sometimes these crystals may create a stunning star effect.

The clarity for a top ruby of the same colour grade consists of very very small inclusions, or “loupe clean.’  When examined with a 10x loupe, no inclusions can be detected. These gems are referred to as “eye clean” and  “loupe clean.”  Loupe clean natural rubies without treatments, in large sizes over a carat, are very rare.

The third tier of value for rubies of the same colour grade are clarity graded “included” or clearly not eye clean. These inclusions may be so prominent that the gemstone’s durability may be compromised, or it isn’t suitable for use in jewellery.  These rubies are plentiful.

Colour and carat size have the greatest effect on a ruby’s price.

Colour is one of the most important elements in gemstone grading. Subtle variations can make a substantial difference in the gemstone’s value. Coloured stone grading is very different and more complex than the one used for diamonds. The GIA Gem Color System consists of hue, tone and saturation. The basic hues are red, orange, yellow, green, blue, violet and purple. Tone refers to a colour’s lightness, from colourless (0) to black (10). Saturation refers to a colour’s intensity, from grayish or browish (1) to vivid (6).  The red colour of a ruby is described by referencing other colours present in the hue as being ‘slightly’ or ‘strongly’ (pinkish red, yellowish orange, orangish red, etc.), the tone (light, medium, deep, dark), and the saturation.

The following charts display Hue, Tone and Saturation for coloured gemstones (from gemsociety.org)

The colour of a top ruby consists of a hue of Red, a deep tone of 6/10, and a vivid saturation of 6/6. Rubies and sapphires are the only family of gemstones that reach vivid levels of saturation.

Most rubies are “native cut” in their country of origin. At the cost of losing size, a ruby may be recut by a custom gem cutter and still command a higher price for improving colour and maximizing light return through the gemstone. Emerald cuts add the most value to a ruby, followed by round, pear and marquis. Rubies larger than one carat are rare, and larger than two carats are even more rare. Prices for rubies increase dramatically with larger sizes.

There are a small handful of custom gem cutters in the world who can recut a dull gemstone and transform it into an extraordinary gem.  Please contact us if you would like to have a large size existing gemstone recut.

AAA rubies are most rare and command the highest price per carat.  Commercial and B quality are the least expensive. The Gem Shop can provide a quote for a AAA ruby upon request.

Country of origin:  Unless otherwise stated, all natural rubies sold by TheGemShop.ca are from Madagascar, Mozambique, Myanmar, Tanzania and Thailand.

Carat for carat, lab grown gemstones are a fraction of the price of natural gemstones. These gems have excellent clarity, durability,  and colour – so only the best make it from the lab to your jewellery piece.

There are two different methods of creating lab grown gemstones, Flux Fusion and Flame Fusion.  Flux fusion produces a superior “gem quality” stone and is the only quality TheGemShop.ca offers.  Flame Fusion was a process developed in the late 1800’s that involves dropping powdered chemicals through a high temperature flame. The powdered chemicals melt, fall onto a rotating pedestal and create a synthetic crystal.  Flux fusion is started from a crystal seed and grown into a crystal by applying heat and pressure. Both methods can create a corundum, but the flux fusion produces a higher quality corundum with a superior material, better colour and better transparency that is optically and physically more like a natural gem. Conversely, while flame fusion can also produce a corundum, it produces an inferior quality gem;  both the colour and the material are optically and physically different.  The flame fusion is unnaturally clear and transparent with hardly any inclusions, whereas the inclusions that do present themselves are distinct growth lines that are formed from the chemical process.  A faceted gemstone produced through flame fusion looks less like a natural gem than a gemstone produced through flux fusion.  A gemologist can usually spot a flame fusion crystal without a loupe, whereas the flux fusion stone more often requires a loupe to determine its origin.

According to AGTA (American Gem Trade Association),  the global authority on coloured gemstones and cultured pearls,  lab grown gemstones are considered “synthetic”, as opposed to “natural” for a gemstone that is mined from the earth.  Both the flux fusion and flame fusion stones are graded “synthetic” by AGTA.  Conversely, a gemstone graded “imitation” refers to “a simulant,  which is defined as a man-made single crystal product that is used to simulate the appearance, but not duplicate the characteristic properties of the natural gemstone it imitates” .  The flux fusion process requires greater resources, produces a better stone and is thus, more expensive than flame fusion crystals. Both flame fusion and imitation stones will retail at one tenth the price of a flux fusion stone.

Other than its price, our lab grown rubies bare little to no difference in comparison to a fine quality ruby.  A gem quality lab grown ruby from TheGemShop.ca would be the equivalent to a AAA natural ruby.

All Customizable Ruby Jewellery
GEMSTONE LIBRARY
We're building a library on natural gemstones to help you make informed decisions when buying. Sign up to TheGemShop.ca newsletter to receive updates when a new gemstone is added to our library.
THE GEM SHOP NEWSLETTER
Sign Up
Sign up now and receive a $50 coupon to use on anything.

Tips, articles, featured gems and jewellery. PLUS Exclusive discounts for subscribers only.

Imperial Topaz For Fools and Kings