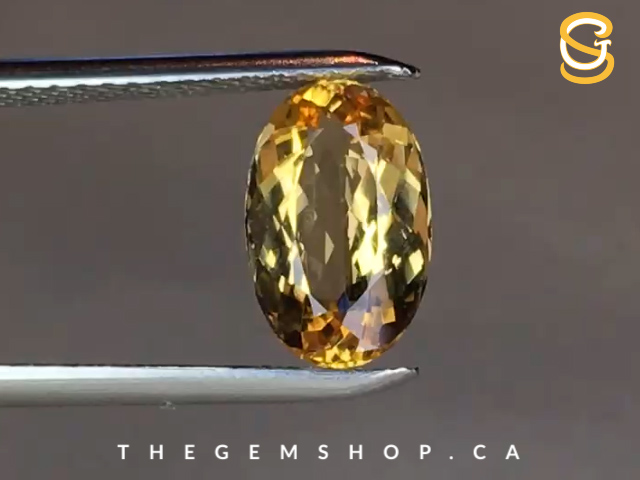 The name for Imperial Topaz originated in nineteenth-century Russia.  At the time, the rare pink coloured variation of the gemstone was mined in the Ural Mountains and restricted to the royal family.  Today, the Imperial Topaz is mined in Brazil, Nigeria, Australia, Sri Lanka, Myanmar, Mexico, Namibia and Pakistan.

The colours of Imperial Topaz are naturally mined as light yellow, orange-yellow, brownish orange, pinkish purple, purple, pinkish orange (salmon or peach), pink, reddish orange, orange-red and sherry red.  The rarest colour is naturally occurring pinkish purple to purple Imperial Topaz.  Also rare is a bi-coloured topaz, as well as light to saturated pink, and a slightly brownish “sherry” red.  The Imperial Topaz may be heat treated from a natural brownish yellow or orange topaz to produce a peach to pink topaz.  Very few Imperial Topaz is actually heat treated because the topaz selected for treatment needs to be without, or with very few, inclusions.  Inclusions will cause cracks in the crystal when heated.  The process of treating an Imperial Topaz is very different than the irradiated topaz that is treated with radiation.  The Imperial Topaz is actually ‘baked’.  Heat treatment involves placing the topaz on a clay tray into an oven where the temperature is brought to 1050° F for about 40 minutes.  The heat removes the yellow centre and the colour of the crystal changes to peach or pink.  Once the crystal has been heated for 40 minutes at 1050° F,  the crystal reaches the end of its colour transformation.  The shade of peach or pink that emerges cannot be altered or deepened with more heat.

Is Citrine a Yellow Topaz?